TIN PAN North is Ontario’s largest 3 day songwriters festival.  Celebrating original songwriting with up close and personal showcases held in the greater Toronto areas, over 3 nights. Highlighting songs from local talent, which each magical session was paired with a well known music celebrity headliner, David Leask and Jason McCoy were the selected event celebrities May 25th at Spot 1 Grill and Music Hall.  TIN PAN NORTH ran thru May 25th-27th as it hosted it’s 18th Annual event throughout Toronto at Cadillac Lounge, Hugh’s Room Live, in Oakville at Moonshine Cafe and in Brampton at Clock ‘N’ Hen and Spot 1 Grill & Music Hall. This was the prime location for this songwriter extravaganza as it is a premier restaurant and live entertainment one stop hot spot.  They host 4 nights of music and Sunday matinees with a menu to salivate over, which was voted Brampton’s most comfortable restaurant.  Whatever the occasion, Spot 1 Grill and Music Hall is there to provide you an entertaining and delish adventure www.spot1live.ca  I was honored to attend this prestigious showcase, as our very own Selwyn area artist Luke Nicholson, now based out of Toronto, was performing his originals.  I am a huge fan of his work as I am of his brother Royal Wood’s.

There were 2 sessions, one at 7:30 pm and one at 9:30 pm, each show performed round robin style, each artist taking turns at talking about their songs, writing style and creative process then each performed an original hit.  Most of the evening it was a full house, not a chair to be found, making this an up close and personal feel.  We got to know the artist attached to those popular hits.  They spoke about love, how old their children are and some shared heart break.  Well worth the $30 admission to this educational 3 day festival.


7:30 PM 1st session was hosted by Jedburgh, Scotland born and raised David Leask. www.davidleask.com.   His style is that of Jackson Browne meets Garth Brooks, as he injected peace, love, pain and even comedy into his one-of-a-kind hits like “INFOMANIAC.” David has built an artistic bridge between the influences of his birthplace and the fresh possibilities of his adopted Canadian home.  He performed songs from his 6 CD collection including from his Clarke Hall Session like “All My Love”.  I simply adored the spin he puts on his songs, celtic flavour & his soulful style of infusing rock into roots. Was just the right amount of country intertwined, truly heart-felt moments, especially with his last hit “Paint” where he involved the audience participation as they sang with him. 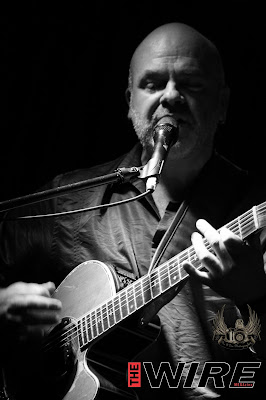 Next up was Carol Harrison, and her guitarist Ray Walsh (The Tucson Choir Boys and Cheryl Lescom) who set a soft stage.  She is also a NSAI TIN PAN NORTH Songwriters Festival Committee Member and a singer and songwriter from Oro Medonte. She writes country folk as she sees it, straight from her eyes thru her heart.  She was nervous with the first piece, but, got right into it after that.  I simply adore singers that ooze passion and when Carol closed her eyes, you felt her satisfaction.  She released her new CD “Passage in Time” at this TIN PAN NORTH show baring her hits like “Where Does Love Go?” and this one registered with me, did what music is supposed to do, grab the fans attention, very teary and touching piece. 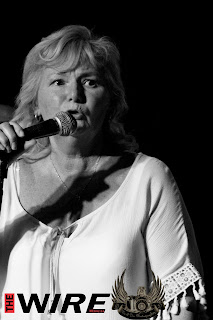 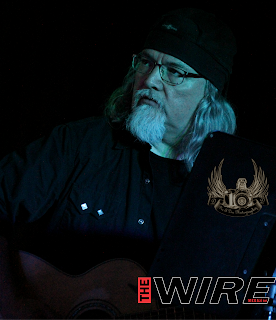 Nicole Rayy, you see that beautiful smile, hear that angelic voice and her live on stage personality, she’s go the whole package, you wouldn’t know she ever experienced love gone wrong, but, her powerful pieces dispense painful love and how to bounce back, be “FIRE PROOF.” She let’s it all out, not shy one bit.  This gal infuses rock, pop and country with plenty of heart and honesty in all her works of art.  She is raw and painfully real, hitting home quick a few times with my heart.  This singer/songwriter didn’t pull out her piano she brought along a talented friend Brandon on guitar.  Introduced us all to her hits from her recent CD “Dig” which has guarnered 63,000+ views/hits on Spotify.  Stay in tune with Nicole at www.nicolerayy.com 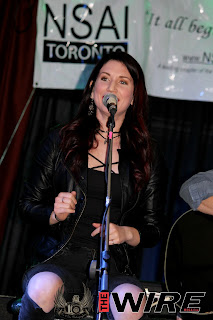 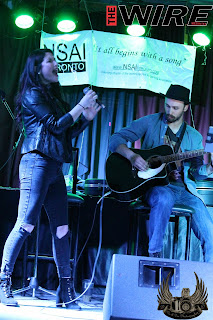 9:30 PM session saw 5 TIME JUNO award winning Jason McCoy as host.  I have enjoyed watching his magic many many times at festivals, concerts, award shows and private parties, generally with his band or The Road Hammers, so naturally I was excited to see him solo that night.  I was very intrigued to see Luke Nicholson.   I have seen him once many years ago and it was brief, this time it was more on a personal level, as if he was in my living room or I was in his.  Originally from Selwyn near Peterborough and now based out of Toronto with his wife and family, he still hasn’t lost that small town country feel to his writing. This alternative, folk pop singer-songwriter has numerous nominations, awards and accomplishments that brought him here that magical night.  He has been recognized for his create songs which earned himself a Gene Nomination for Best Original Song in 2008, has entered an International Songwriting Competition, performed at CBC New Music Fest, has 4 TOP 10 singles on CBC Radio 2 Top 20 Countdown.  He recently signed his sound to Make My Day/Indigo Records in Europe, publishing deal with Warner/Chappell and distribution deal with Fontana North. Luke opened his heart and shared his masterpieces like “One More Night” from his album “Frantic City”, “Lights of Nashville,” as well, a song I do believe titled “Pedal to The Floor” that he co-wrote with 24 year old Danielle Todd from Guelph, while in Nashville, 1st hit from his new album “Shape and Sound” entitled “All Your Dresses” which was written he said, “about special moments shared between a husband and wife, while the ideals his father installed in him, to be a good man and father” and this special piece was selected as a finalist in the very prestige’s John Lennon Songwriting Competition.  He shared another dear to his heart song, “One More Night” and even introduced a brand new song he has just written “Baby I Believe.”
Luke is one of the hardest working songwriter males I know. 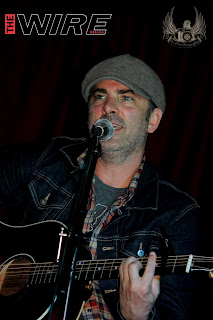 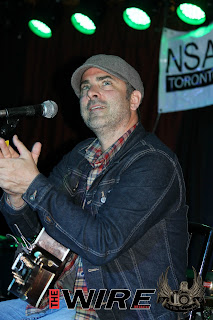 Unfortunately, festival director, Dan McVeigh had issues with his keyboard, 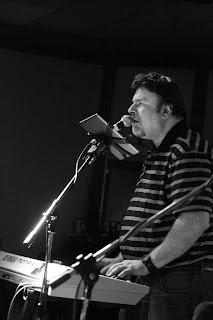 but, luckily living in the area was able to drive home and bring his spare electric piano and was able to highlight a few of his fantastic originals, once again based on love.  He is a local country songwriter from Brampton whose current album “Drove” has caught the attention of Country Music News publication. Dan McVeigh has his music spinning at national radio with “You Are All I Dream Of”. This piece went to #1 on “That’s Country.com”.  His songs have been recorded by a number of Canadian artists such as Valerie Raymond, Debbie Nelson and Myra Leblanc . He is working on his new CD “Resolutions” to be released in 2017 and he performs in Ontario and Nashville whether solo or with his band “North of 49”. Dan has performed with a school friend of mine from Bracebridge now Nashville Victoria Banks, Frank Myers, Tim Johnson, Tim Taylor, Diane Chase, Gil Grand, Colin Amey, Jason Barry, Barry Brown, Bruce Michael Miller and Wendell Ferguson to just name but a few.  He expels how a man can be completely captivated by women, a breath of fresh air from some of the standard, what I call hard country, drinking and loosing love; Dan writes about faith, hope and positive love in his hits, and if you wish to keep up on Dan visit www.danmcveigh.com
Jason McCoy 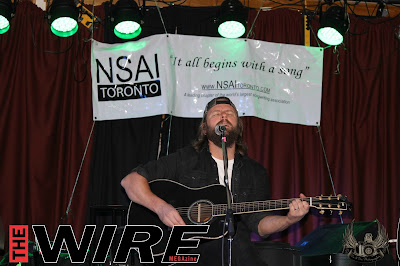 the headlining celebrity brought in the humor to this session.  The veteran on stage is not just a dad, husband, Canadian Country singer/songwriter, he is internationally acclaimed recipient of the 2001 CCMA Male Vocalist of the Year, 6 time Ontario Country  Performer and fan Association (OCPFAs), 2006 CMA Global Artist of the Year, 3 SOCAN Song of the Year recipient, a 19 CCMA nominated, 5 Juno nominated (all for Best Country Male Vocalist), 2006 he was awarded the Global Artist Award at the CMA Awards in Nashville & he is also one of the three members of the hugely successful The Road Hammers, which has released two studio albums, in addition to charting four singles in Canada and one in the United States.  1st song, meant so much to me, as my childhood friend and multi award winning songwriter Deric Ruttan, co-wrote with Jason on McCoy’s hit  “I’d Still Have Everything” from his “Everything” 2011 CD.  Jason shared “Dixieland” from his 1997 CD “Playing for Keeps.”  Next, Jason took suggestions from the fans and performed “MUDD” from Road Hammers 2014 album “Wheels” and a song he won a CCMA songwriter award for “Rocket Girl” made famous by DOC WALKER.  Highlight for me was when Jason got the audience and Luke Nicholson 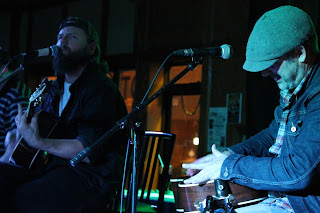 involved in his Road Hammers fun song, “Haulin’ Ass” which is an original wide open road themed style song from their latest collection “Squeeze.”  Jason was born in Barrie, yet, raised for a time in Camrose, Alberta before his family moved back into Ontario once again.  He has been writing songs and playing guitar before he was a teenager some 35-40 years now, he played rock and country growing up and was discovered in 1995, recorded his 1st album and signed with MCA the rest they say, is history.  He is a radio personality, award show host and so much more, stay in tune with Jason at both
www.jasonmccoy.com & www.theroadhammers.com
This fantastic TIN PAN NORTH 18th Annual Songwriters Festival http://nsaitoronto.com
was made possible thanks to their dedicated Sponsors:
*NSAI (Nashville Songwriters Association) who has become the most important  “voice” for every American songwriter.

*IT’S ALL ABOUT Z MUSIC