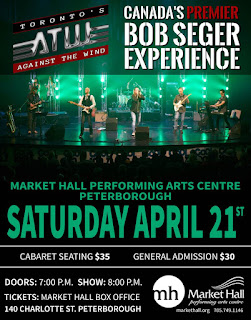 PRESS RELEASE
Against The Wind ~ Canada’s Premier Bob Seger Experience
For Jeffery Goldstein, Toronto based drummer, entrepreneur and founder of “Against The Wind” – Canada’s Premier Bob Seger Experience first envisioned building this authentic salute to Bob Seger and promising fans an on your feet, dancing in the aisles good time, waving their arms and belting out the lyrics that over decades had bookmarked their lives”, thanks to the raw passion and gritty Detroit sound that is the undeniable, “Bob Seger & The Silver Bullet Band”, trademark.  A few years ago Jeff met John Jamieson a musician and owner of Soundhouse Studio, they had found the key element to solidifying this vision. John, as musical director and co-producer, has structured and maintains a strong foundation that is responsible for this band having the organized creative freedom to perform at full potential led by his longtime experience and rock solid keyboard style.   With that focus, ATW is successfully bringing these memories back to life for their audiences.  The launch of ATW in 2015 marked 35 years since Bob Seger’s, award-winning album and hit single, “Against The Wind ” was destined to become etched into the public’s minds and hearts. ATW sets the stage for memories and new experiences. This band is dedicated to honoring Bob Seger, paying homage to the undeniable motto – “Rock and Roll Never Forgets”. ATW’s song-list includes selections from Seger albums that are obvious mega hits throughout the 60, 70’s and beyond. “You just can’t shake a memory that feels so good, so right” – that’s why booking ATW makes total sense in a time when, “the feel-good” factor is what the audiences are yearning to feel and re-experience, a guaranteed recipe for success.  An ATW performance delivers the vibrant, polished collection of adored hits you would expect from this band of outstanding musicians.
Come catch Seger Fever April 21st, 2018 8pm (doors 7pm ) at
Market Hall Performing Arts.
Hurry don’t delay, pick up your
$30 General Admission or your $35 Cabaret seat ticket today at
140 Charlotte Street, Peterborough, ON (705) 749 -1146
https://tickets.markethall.org/ordertickets.asp?p=660&backurl=default.asp
www.againstthewind.ca