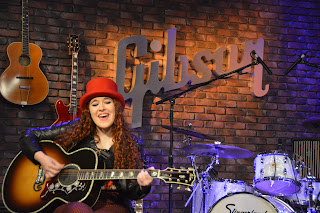 PHOTO by Debbie Giroux
Deb: 1). Sophia, what age did you realize entertainment was your destiny ?

Sophia:  “I’ve always loved to create and perform. At the age of 12, I picked up my dad’s guitar, and started to teach myself to play. That’s when I started writing, recording and performing my original music. From that moment on, I found my passion for songwriting and the guitar. The guitar is my muse. It speaks to my soul. I am blessed with supportive parents, family and friends. Writing and performing is my greatest passion. I have always been self-motivated and ambitious when it comes to the world of music.  I’m working hard at achieving my dreams. I love to rock! And, I love the world of Rock N Roll! “

You are never idle!   Always creating, performing, recording mind blowing masterpieces and your award winning acknowledgments are plentiful, earning you titles as a Gibson Guitar, Marshall Amp, GHS Strings, Singular Sound and Presonus Endorsee who is also sponsored by American Hat Makers and is the face of Grindrod 2017 Amps. You have not slowed down one ounce since 2013.  You are credited as being a lyricist, composer, vocalist, rhythm guitarist, journalist and now band leader of your 1st Canadian self titled rock band.  You have written over 200 songs, co produced your 2 albums, have been working with Grammy Award Winning Producer, Rob Fraboni (of The Rolling Stones, Bob Dylan, Bonnie Raitt, Eric Clapton, Joe Cocker) on your 3rd album.
Deb: 2). When does Sophia find time to be Sophia?
Sophia: “Thanks for the epic compliment Deb! My life is all about music. I feel that I am most who I am, when I’m doing what I love; songwriting, performing and working with others like me. I am blessed to be able to do what makes me happiest, and to be rewarded for what I do is a great, great honour and privilege. I am very grateful. I love working hard. I believe in myself. I’ll keep up the hustle and the grind! “
You remain down to earth and have not lost your sense of self.  You are a caring, giving, gentle, positive persona, and have witnessed souls in the musical realm get lost and caught up in this whirlwind business.
Deb: 3). What advice would you give to new artists starting out?
Sophia: “Thank you so very much for the beautiful and humbling compliment, Deb!
My advice to artists starting out, and artists like me, is to be continuously inspired to do what you love. If you’re committed, and if you can stay grounded, you will find a way. Remain focused! Keep the intellectual curiosity alive. Continue to learn as much about music as you can! This way, there is always room to grow. And, remember that there is so much you can achieve, on so many levels, if you put your heart and soul into it! The world of music is layered. Success is not easily definable. You can’t buy experience, but you can create it! Fight to be heard. Go where the love is. 🙂 “ 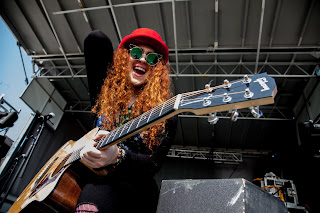 PHOTO by  Thomas Weller
Deb: 4). Do you recall the title of your very first song you ever created and where were you at that particular moment in time?
Sophia: “Yes! “Love Is The Music Of My Soul” is the first song I wrote. I was taking an acting for the camera class, and we had to do a self portrait exercise, in order to express ourselves artistically in class. I was inspired by a quote on the wall, and I wrote this song. I picked up a guitar in the classroom, and performed the song. My coach told me to keep writing and performing, and to never stop. I listened to her. I followed my heart and intuition. And, I am happy I did! “
Sophia has graced stages all around the globe with the most inspiring world renowned names in music history.
Deb: 5). Who would you say you learned the most from musically Sophia?
Sophia:   “Sometimes, I learn the most from a simple moment in time.  An idea that inspires me.  Mostly, I learn from my musical heroes. I listen to their music or interviews. I research and read about them. I can say, that I am more inspired musically now, than ever before. I’m currently in the studio with Grammy Award Winning Producer & Former VP of Island Records Rob Fraboni. He has quickly become a major influence in my musical journey! I am honoured and humbled to be working with this epic and legendary producer.“ 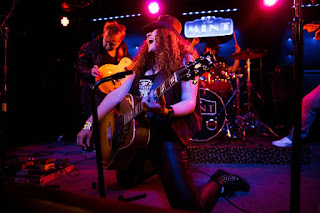 PHOTO by  Tyler Miles
Deb: 6). What would you say was the most magical musical moment in time for you?

Sophia: “Performing my music, and being free to express myself to the world through my songs is magic, every time! Feeling the love and support of my fans and friends completes the magic! “

Deb: 7). How do you keep your unique vocals in shape?
Sophia: “I don’t drink alcohol or caffeine, and I don’t smoke. I love water. I especially enjoy eating hydrated foods, and drinking warm honey water before a show. “
Deb: 8). Your first two albums 2014’s Intoxicated and 2016’s Beautiful Sin are full of energy and oodles of innocence, will your 3rd album follow in this song-writing style?
Sophia: “Yes and no! I’m so very pleased with the way I’m evolving as a songwriter, and I can’t wait to share my new music. My songwriting range is growing, and my sound is growing with it. I will keep the “surprise” alive! I want my new music to continue to speak to peoples’ souls. I’m really thrilled about my upcoming album with Grammy Award Winning Producer, Rob Fraboni. Along with my passion for music, my friends and supporters inspire me to keep doing what I do, everyday! “
You have most recently ventured forth into a high energy 5 piece self titled Toronto based act, which enhances your ambitious, accomplished and cleverly written masterpieces.  I adore your song-writing complexities, your trailblazing spirit and the growth of your songs, mixing soft and innocent with a mesmerizing and addictive harder sound, truly brilliant.
Deb: 9). Tell your fans how this incredible transformation came about? 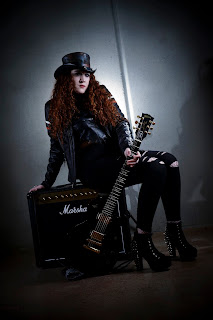 Sophia: “You rock, Deb! I’m so very, very honoured to have your friendship and support for my music. Thank you! I was inspired to start bands in both LA and Las Vegas as I have some hardcore support there!  After touring in the USA, and returning to Canada, I felt compelled to start up a Canadian Band.  With Rob Fraboni producing my 3rd album, I feel incredibly energized and inspired musically. As I mature, my compositions mature, and I naturally grow as both a singer-songwriter and a musician. I am very happy with where I am musically and the direction I’m taking. As well, it must be said, that a big part of my growth is thanks to my friends and supporters!  I am very grateful for them, and thankful that they are always here for me! “
PHOTO by Photo 1 – Mike Farkas


Deb: 10). Your new band is performing for the 1st time on June 21st, as part of T Dots Records Sounds of The City diverse night of music, comedy, food and drinks, located at The Boat at 158 Augusta Avenue in Toronto.  Where can fans get their $10 tickets and what can your fans expect at your stellar showcase?
Sophia: “You can get your tickets at this link, or at the door! It’s going to be an epic night! It’s really exciting to be debuting my Canadian band @ The Boat in Toronto. Rock N Roll vibes!“
https://www.eventbrite.ca/e/sounds-of-the-city-showcase-the-boat-tickets-44318037443 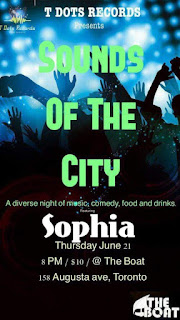 You have a busy Summer starting.  Here is just a sneak peak to some of those dates:
June 21 at The Boat with full BAND, at 158 Augusta Avenue – Kensington Market – Toronto &
TICKET LINK is ABOVE!
June 22 at the Rockpile Bar and Nightclub opening with your Band for
Darkest Side of the Moon Tribute to Pink Floyd a ROUTE69 Production at 5555 Dundas St W
in Etobicoke at 8pm $15/advance tickets online here or $20/door
https://www.ticketweb.ca/event/darkest-side-of-the-moon-the-rockpile-west-tickets/8397765?pl=rockpilewest
June 23 at Big Daddy’s Rock n Roll Emporium opening SOLO for Bowie Lives Tribute to David Bowie 9pm at 446 Davis Drive in Newmarket.  $15/door.
July 7th at Harbour Street Fish Bar located at 10 Keith Ave # 403 in beautiful Collingwood, Ontario – opening SOLO for Bowie Lives Tribute to David Bowie
July 18th at The Marketplace – Simcoe Place- 200 Front St West in Toronto – full BAND
Aug. 23rd at Smiling Buddha – 961 College Street in Toronto – full BAND
FOR FULL DETAILS on JULY 18 and AUG 23 BAND GIGS and TICKETS
visit www.sophiaradisch.com
Deb: 11). Tell your fans where they can stay in tune with you and update themselves on your busy tour schedule ?
Sophia: “All of my social media links can be found on my website and you can follow my Fan Page updates there as well! Thanks for asking Deb! “
Deb: Thanks so much Sophia for your time.  Folks, bring your autograph books and get this young gals signature, as she is the next music icon on the horizon.

Sophia: “Thank you Deb! Thanks for this amazing opportunity to share my music with you and your readers. You rock + rule! Sending Love + Light. Rock on! “