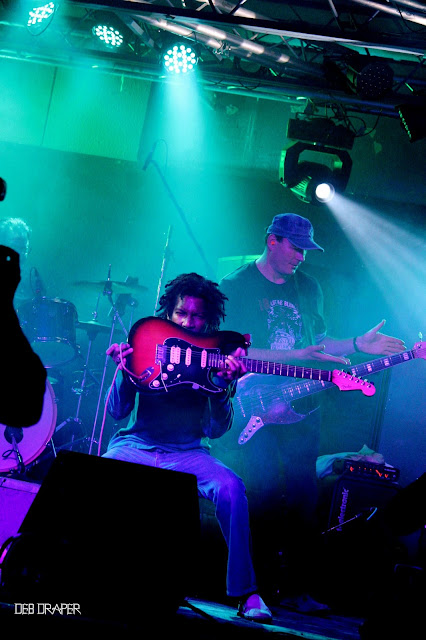 When you have received a Juno Nomination, an endorsement deal by Queen’s Brian May, worked for Rough Trade and David Bowie, known for 27 years as Wild ‘T’ and The Spirit and 32+ years as legendary North American Jimi Hendrix impersonator in the tribute act ‘Fire’, you know you have become a treasured Canadian guitar legend.  Anthony Springer is a charismatic, honest, passionate and inspiring soul, who is not ordinary, as he exudes raw energetic emotion as a musician.  Tony Springer is an internationally acclaimed entertainer, singer, song-writer, composer, actor born in the 60s and was destined to be a musical guitar creator and innovator.  He is a true gentleman from Tunapuna Trinidad but, is based out of and is a Canadian treasure.
I am thrilled and honored to interview my friend, the Iconic, Toney Springer.
Deb      Q)        How are you doing Toney?
Toney   A)        “I’m doing fine Deb!”
Deb      Q)        When did you realize music was going to be your life long career?
Toney   A)        “Well, let’s just say that the1st chord I ever played was my umbilical cord (chord) ha ha“ 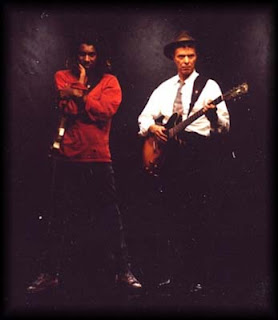 “An absolute delight to work with – a lyrical, lilting take on Hendrix.”
~DAVID BOWIE~
(submitted photo)
“I followed him around like he was a messiah…Tony’s been my idol for years.“
~JEFF HEALEY~
Deb      Q)        What was it like to be quoted & acknowledged by Canada’s Juno, Gold, Platinum and Walk of Fame awarded, Jeff Healey & by 6 time Grammy and 1 of the world’s largest awarded entertainers in the biz, David Bowie?
Toney   A)        “It was & still is a humbling experience. I first met Jeff playing around the bar scene in & we became friends. I still have some home recordings that we did in my (back then) basement apt.  As far as David Bowie goes, what can I say? He kinda reassured me that I was on the right path”.
Deb      Q)        Being in the spot light at an early age, did you ever get nervous & how did you handle that on stage?  Also, with your in depth musical stage experience now, do you get nervous performing thousands of shows a year, throughout the world?
Toney   A)        “Yeah, in the beginning I was big time scared but, it never affected the music, that always felt divine, but, over the years the fear subsided.  Although every once in a while it tries to get me but, I don’t allow it , after all it’s only fear …it’s nothing (nutten) to be afraid of ha ha”
Deb      Q)          You have performed internationally many times over, some of the largest Festivals and stages this planet has to offer.  Yet, you feel right at home in an intimate up close and personal show at a Toronto venue, what is it like to perform in your home towns of Toronto or Tunapuna to a sea of familiar faces in the audience, singing along?
Toney   A)        “Festivals & big venues are great especially when you can get thousands of people to focus & feed you their energy but, nothing beats being in an intimate setting where you can feel & hear all the instruments next to you…it’s like coming home”. 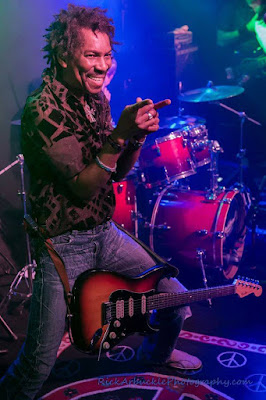 Deb      Q)        Generally seen with a Fender Stratocaster, is there a difference in feel, creativity and sound of your Stratocaster to your endorsed Brian May custom White Pearl-on-White BMG Special?  Do you endorse any other brand or gear?
Toney   A)        “I have played Stratocasters longer than any other guitars so of course I am very comfy with them, that being said, I do love the challenge of venturing out of my comfort zone & trying new things and that goes for guitars too ….BTW, my Brian May guitar is a thing of beauty, it’s got 2 octaves plus a very wide neck which makes me play with a slightly different feel.  I endorse DV Mark guitar amps, MI Audio pedals, I think that’s it”. 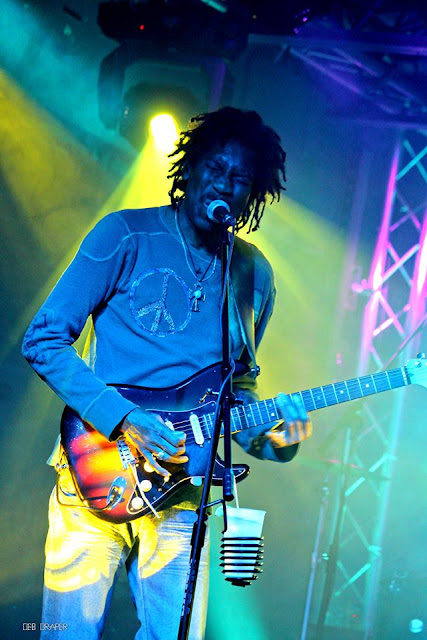 You are a Q107 homegrown finalist for your song ‘Yvonne’, you were in Rough Trade & recorded on “Birds Of A Feather: The Best Of Rough Trade” collection, then 1991 Tin machine featuring David Bowie, were performing in Montreal and Bowie heard your ‘Midnight Blue’ on Musique Plus, shortly thereafter, contacted you in 1992, brought you to New York to record his ‘Black Tie White Noise’ album, and further, Bowie recruited you as his touring guitarist on talk show circuits appearing on Leno, Arsenio Hall and David Letterman.  You have shared stages with such great acts as Bon Jovi, Deep Purple, Grand Funk Railroad, Robin Hawkins and with world renown guitarists Joe Bonmassa, Walter Trout, Rick Derringer, Kim Mitchell, Eric Sardinas, Uli Jon Roth & Pat Travers…to name just a few!
Deb      Q)        Wow, what true honors and such career highs.  How do you remain so humble and down to earth through all this?
Toney   A)        “Ha ha music is the food of love babe…I strive to be a creator of good music and that never changes.”
Deb      Q)        What was the best advice you were given about the ins & outs of the music industry?
Toney   A)        “The best advice I’ve gotten from many people including Eddie Grant, was to keep writing & keep creating”
Deb      Q)        How do you react when you hear one of your songs on the radio or see yourself in videos from way back when or concert photos especially with Bowie?
Toney   A)        “I feel like WOW, OHH YEAH! but then I quickly ground myself, take a deep breath & take it as a grain of salt”.
Deb      Q)        Has your creative process changed and have you felt a major shift in music today compared to when you first began in your early teens?
Toney   A)        “I really don’t think that the music industry has changed that much, cultures have though. Everyone knows that the music industry is a cut-throat business but, so is almost any business & such is life…I have been quite fortunate to never have had a day job except for a year & a half in Trinidad, working for an insurance company, it’s always been all music with me …Lately though, I do feel like I have a day job sometimes when I wake up at 11.30 am to go play at 1pm or 2pm ha ha but, all kidding aside”.
Toney, your style of blues, rock, funk & reggae have found your band captivating audiences all over North America & Europe for the past 25 years!
Deb      Q)        Which is your favorite location to perform and why?
Toney   A)        “I particularly like playing in Europe, we have lots of friends & fans in but, every audience is an audience to capture”
Deb      Q)        Is there a location in the world you have not performed that you would love to?
Toney   A)        “I’d love to go to , , to name a few”.
Deb      Q)        With numerous accolades and 7 albums released; with Wild T & The Spirit’s “LIVE” (2015) being your current album, can you tell your fans which 1 of your songs is your FAVORITE and why?
Toney   A)        “They’re all my favorites, each one holds a special connection or experience for example, “I’m a River”(Givin’ Blood) was written in 15 minutes,  whereas “Midnight Blues” took a little longer. Sometimes persistence pays off but, in the big picture they’re all my babies ha ha”.
Deb      Q)        Steve Howe & classic ‘Yes’ inspired you (I read) to take up guitar and of course Jimi Hendrix is a strong reference in your playing?  Who are some of your other influences then and now?
Toney   A)        “I’ve always tried to not be influenced by anyone (it’s like the influenza & who likes that? ha) I get inspired by free spirits, not necessarily guitar players but, to name a few musicians there’s Boxcar Willy, Nana Mouskouri, Sly & the Family Stone & George Benson”.
Deb      Q)        Your current lineup consists of bassist Guenther Kapelle and drummer Dave Langguth (of Kim Mitchell, Nelly Furtado, Gilby Clarke).  How long has this trio been going strong as 1 unit?
Toney   A)        “This trio’s been together for about 5 yrs…Gunther & I have been together for about 15 yrs”. 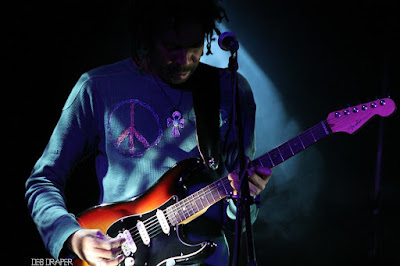 Deb       You have embarked Feb 24th until the end of March on a
Spring Western Canada Tour WESTERN CANADA TOUR 2017:

03/18 Calgary, AB – Blues Can
and return to Ontario April 07th at SGT. PEPPERS PUB in Scarborough.
(please visit their site to stay informed regarding all their shows dates).
Deb      Q)        What can we expect at a Wild T and The Spirit show?
Toney   A)        “Well so far we’ve stopped headaches, created unpreventable dancing, encouraged alcoholism, saved the whales & currently trying to prevent global warming …just to name a few ha ha”. 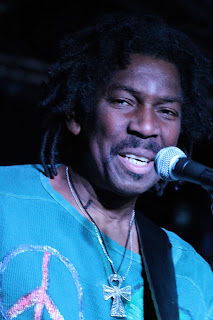 Photo by Deb Draper
Deb      Q)        Is there any special information regarding events forth coming, that you wish to share with your fans that is not listed on your website?
Toney   A)        “No, I think it’s all on the website www.wildt.ca“
Thanks again Deb …talk soon.
Peace    T
Thank you so much for your time Toney, have a rockin great day! ”
By Deb Draper
Volunteer Contributor Photojournalist The Wire MEGAzine
www.thewiremegazine.com