September 23, 2016 Live Music No Comments
STAYING IN TUNE with
STEVEN TYLER
September 13th, 2016
PHOTOS and article are COPYRIGHT of Deb Draper a volunteer Photojournalist with
The Wire MEGAZINE www.thewiremegazine.com 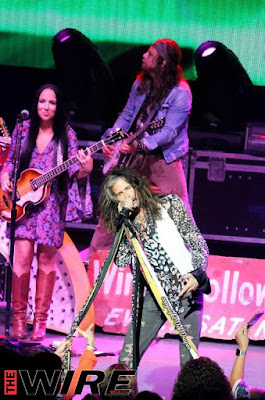 Steven Tyler had an explosive summer with an impressive 19 city North American tour entitled
Out on a Limb.  September 13th was a sold out concert filled with an all aged crowd excited to catch a glimpse of American singer/song-writer, multi-instrumentalist, former TV music judge and the ‘Demon of Screamin!’ 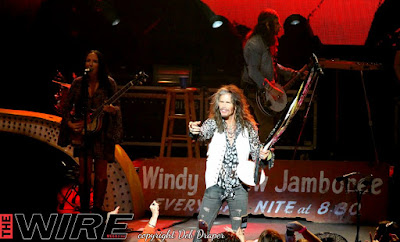 Steven pointing out Ronnie Hawkins
This Aerosmith legendary front-man, brought his solo rocking country show to the Sony Center for the Performing Arts in Toronto, backed by Nashville’s Loving Mary, for his last show on this leg of the tour-which will resume once again in January 2017.  What an outstanding (no pun) performance!  Approximately 3,100 fans including the Legendary Ronnie Hawkins were in attendance, as they all stood thru the entire 2.5 hour show, a perfect setting for
Steven Tyler & his live & interactive country rock show. 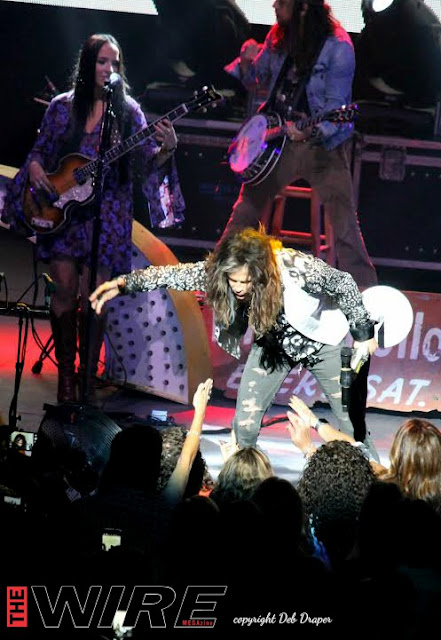 I enjoyed this immensely, as I was one of 5 media sources chosen to cover
the event and capture the multi-award winning artist. 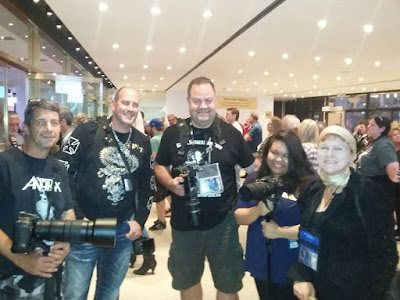 I have passionately followed Aerosmith all my life, and I truly enjoyed this show just as much as my 1st Aerosmith concert back in June 1989, if not more.

His mix of rocking country was genius,
and to prove that statement, his 1st solo album “We’re All Somebody from Somewhere” has reached No. #1 on the Billboard Top Country Album Chart, which is picking up momentum and has sold over 17, 000 copies in the 1st week ending July 21st. 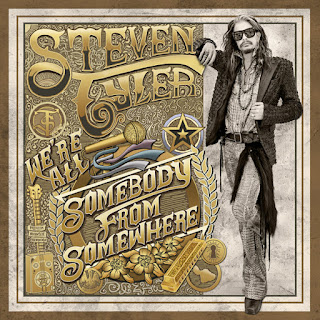 This show was nothing short of spectacular filled with humour and was a unique blend of countrified Aerosmith hits, covers and originals released and yet to be released. 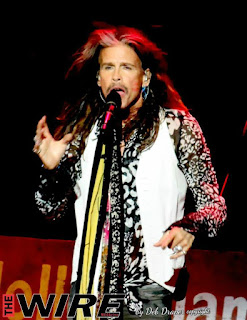 One of the highlights outside of taken photos with hands just a shaking,
was listening to Steven’s rendition of Janis Joplin’s
“Piece of My Heart.” and to witness his wide range of vocals especially the constant use of his signature falsetto, bringing tears to my eyes, he still sounded familiar, with the same raspy voice with that trade-mark tenor scream, just like I put my finger on the pause button. Producing high notes requires a very finely coordinated stretching of the vocal cords.  The vocal cord edges must also be straight for the note to sound clear.  So considering Steven underwent throat surgery 10 years ago on 2006,  his vocals are still strong, clear and precise at 68 years young,
sounding like he did 46 years ago. 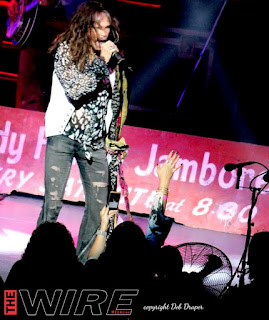 It was awesome to see him carry the same swagger, and fabulous stage presence that once attracted me to him when I was a teen.  Glad to see he hasn’t lost his incredible entertainer charisma and is still sporting his iconic signature colored scarfs adorning his mic stand.   It was magical to see the sea of satisfied smiles from legions of fans as they cheered while
Loving Mary band totally kicked ass!! 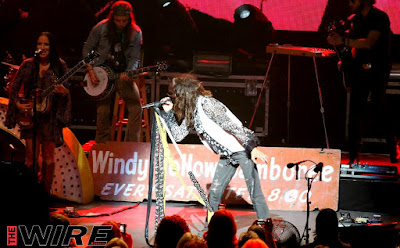 Steven Tyler belted out his hits, honked on bobo (harmonica), strummed the ukulele and strutted his well toned slender frame, like it was yesteryear. 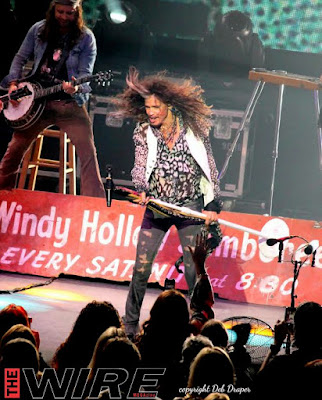 Tyler stated,
“It would be that I opened the door to country being allowed to rock a little bit more.  As you know, no great story ever started with ‘I had a salad last night.
It is sex, drugs
and rock n roll.”

Performance was top notch, emotional, genuine, sharp edged, raw and real and mouth watering like a T-bone steak.  It was juicy, hearty and meaty, just what I anticipated off his performance menu of Aerosmith hits like Sweet Emotion, Cryin, Jaded, Dream On with Steven on piano, Walk This Way and covers I’m Down & Come Together by The Beatles, even a taste of Led Zepplin’s
Whole Lotta Luv mingled in. 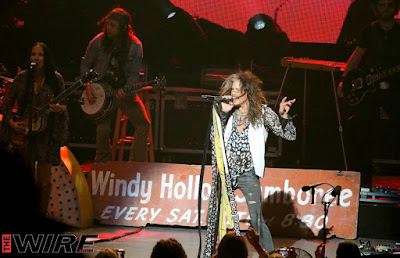 The smooth Train Kept A Rollin (song by Tiny Bradshaw) was a perfect song to include as it depicted Steven Tyler’s career.  The audience went nuts as they rocked Rattlesnake Shake.  I really adored his new songs like the love of a good woman-American pride song Red White and You, Make My Own Sunshine, We’re All Somebody From Somewhere
& my favorite–Love Is Your Name
https://www.youtube.com/watch?v=d0n40GVcj64&list=PLa_KP_nhtORhw75IsVT2poZOZuWjUk8EG 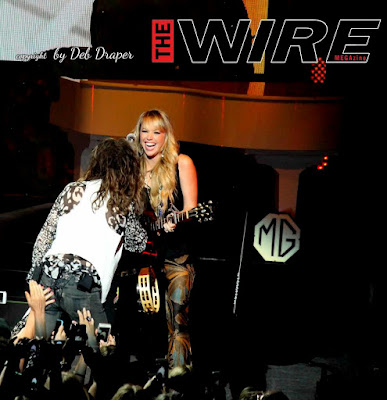 SURPRISE of the night for fans was when Steven announced, “This song was a hit and still is a hit” further surprising band mate and Mississauga born Suzie McNeil, as he asked her to sing her song Believe a 2010 Canadian Olympic Team Anthem, as Steven harmonized through the piece.
Loving Mary’s- Marti Fredericksen, Rebecca Howard, Suzie McNeil, Elisha Hoffman, Andrew Mac Taggart, Sarah Tomek gave Steven a re-issue 1962 Paul McCarty bass as an appreciation token. 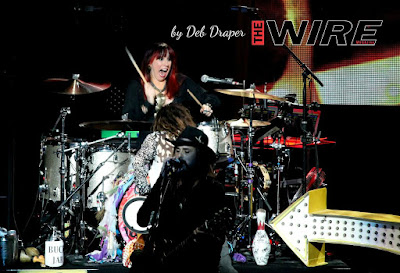 Tyler and Loving Mary didn’t disappoint with an Encore set featuring his It Ain’t Easy which is the 2nd song from his new album and then a countrified version of his Janie’s Got a Gun. 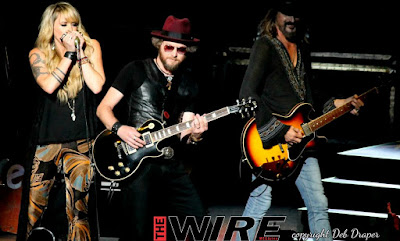 “Country as I See It”– Steven Tyler has no intention of being anything other then himself and that echoed the entire night, you obviously cannot take the rock n roll out of Steven Tyler’s soul.  His traditional high octane, supreme energy, sexy and excitable stage moves, incredible vocal ranges sure proved that this smooth hard rockin dude gone country boy, isn’t going anywhere but up the charts and into the hearts of a new and younger generation of fans, that will get to experience what we baby boomers adore about Steven Tyler.
Yes, you can teach an old dog new tricks! 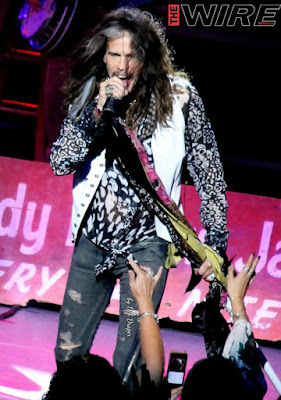 Hop on board the Steven Tyler  train for a real musical thrill ride that will be roaring thru a city nearest you in 2017 www.steventyler.com 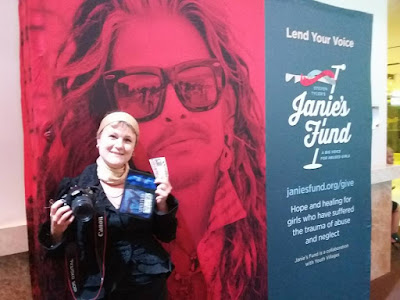 Steven Tyler has launched a program Janie’s Fund http://www.janiesfund.org
which is in support of abused and neglected  young females, a cause dear to my heart, as I was an abused female most of my life.

https://www.youtube.com/watch?v=9NqP7EENwz4
ALL PHOTOS taken and are COPYRIGHT of Volunteer Photojournalist Deb Draper and
The Wire MEGAZINE www.thewiremegazine.com