Kickin it off with Toronto’s Metal staple Demolition Rage who grabbed the audience’s attention with their edgy and in your face originals laced with heavily influenced AC/DC moshed with Pantera sounds.  Demolition Rage has developed a mesmerizing thick and massive sound, characterized by the blistering and amplified guitar riffs scorching out of Fabio La Rocca mixed with the rich and colorful emphatic bass beats of the significantly impressive Kevin Brazolot.  Sir Bassolot strutted the stage dominating the rounding backbeat along with Cam Cathcart’s strong hard and heavy hitting sounds, truly marking the skins giving way for frontman/lead vocalist George Petkovski, to vocalize his talent range from a deep rich falsetto into high stratospheric dimensions. They sure were “Adjusting The Pain” as they left you “On Your Knees” ready to “Bring It to The Fight.” They rocked it loud and proud giving us a “Taste of Hell” especially with their addictive and ignited metal version of The Cult’s “Lil Devil,” which lit up their decorated sea of DR fans decked out in the band’s branded shirts. “Demolition Rage is like a good wine that gets better with age,” so stay tuned with their authentic, genuine and euphorical charge upon the metal scene, at www.demolitionrage.com 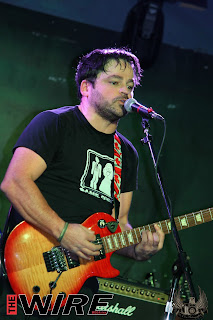 Voice of Treason cranked unlimited supplies of crowd pleasing covers by A list artists like Tragically Hip right up to The Cult in their timeless repertoire!!!! Their strong delivery persuaded the audience to fill the dance floor. Feel free to catch up with them at https://www.facebook.com/voiceoftreasonrocks

Fans from as far away as Montreal, Niagara Falls and Barrie filed into 5555 Dundas Street West, Etobicoke’s Rockpile Nightclub to catch Cold Ethyl’s fanfreakintastic Tribute to Alice Cooper. They delivered a brilliant classic rock show with extreme accuracy as they replicated Internationally Acclaimed Living Legend Alice Cooper’s award winning hits that span 5 decades! These Brantford boys are rocking their magic actively all over the Ontario music scene, with sold out venues filled with superb energy and clearly no signs of slowing down. 20-year music veteran Brett Davidson’s swagger and infectious stage energy kept me on my toes giving us several thrills, what a true showman, right down to the identical clothing, props and mannerisms of Alice. Pumping out dynamic cover after cover with exhilarating versions making me feel like I was “Caught in a Dream,” like poof, “I’m Eighteen,” again, totally a trip backwards in time like a “Generation Landslide.” I didn’t feel “Guilty” for putting down my camera briefly, to watch this act when they engulfed the stage with “No More Mr. Nice Guy, which gave me a quick moment of rest which followed shortly by non stop captures of Brett swinging from the rafters off of baby doll props which ramped up to 1 of my favourite songs of the night,“Billion Dollar Babies.” I was pleasantly assured when they struck into “Welcome to My Nightmare.” “Cold Ethyl” nailed it with the feel-good tune “Schools Out,” charismatic show an understatement. If you want a stellar show that engages your senses, these rockers will wet your appetite guaranteed. Thanks for your “Muscle of Love” you truly gave this gal a great “Escape.” Catch them live in a city nearest you as they are coming your way Brantford at Manny’s Place on April 14 at 930pm, so stay tuned to this explosive sound at https://www.facebook.com/coldethyltribute

Drop by Route69 Productions
https://www.facebook.com/Route69-Productions-264289367414474 and stay up to date
with their all ages shows at the hottest live music venue in the GTA, The Rockpile: