June 2, 2018 Live Music No Comments
Serendipity, is an occurrence and development of events by chance in a happy or beneficial way, and that pretty much describes how I met The Slambovian Circus of Dreams in 2015, as well, how Hugh’s Room Live was revived. 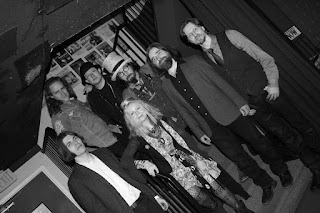 March 30th, internationally acclaimed brilliance. known as The Slambovian Circus of Dreams, returned for an up close, intimate and back by popular demand Hugh’s Room Live, Toronto performance. One of the most musically explosive, magically addictive sounds revved up the
ir mystical engines releasing their enchanted,
complex and indescribable euphoria, with songs that stretched the limits of psychedelic to progressive rock with a folk pop feel. Joziah’s unique and philosophically penned pieces made you “Look Around” (a new song being produced by engineer Dio Tadin in New York). This was their 1st time performing it live, setting the mystical tone for the evening, directing us onto a “Lost Highway” while we experienced an “Absolutely Beautiful Friggin Day.”   2  time Wire Award nominees and multi-instrumentalists; Uncle and nephew, Dimitri and Tristan Tadin, were special additions on both bass and keys all night long.  Co-founder, singer, songwriter, guitarist, engineer and 2 time Wire Award nominee Dio Tadin, was a special musical guest who introduced Clear Stone’s newest songs “California” and “Born on The River,” unleashing their traditional rock alternatives drenched in heavy Beatlesque and Tom Petty flavour.  19 year old Tristan Tadin perfected his stunning original vocal and piano composition “The World Spinning ‘Round.”  Last song of the night, was a sonic delight, a taste of Bob Dylan’s “Freight Train Blues,”  amalgamating into 1 of their epic hits “The Trans-Slambovian Bi-polar Express.”  A standing ovation encore featured the Beatles “Golden Slumbers” that morphed into their hit “The Invisible.”  Not many original acts, can make a direct triboelectric connection right away with their audience as strongly as they do. They are definitely 1 of the world’s greatest acts that have stood the test of time with an outstanding 18 studio/live and greatest hits abums in an outstanding 20 year span. Stay in tune with The Slambovian Circus of Dreams and Clear Stone, as they both have rare musical gems about to be released.  Visit www.slambovia.com and www.facebook.com/ClearStoneMusic
For the full concert review click on over to www.SeeingShowsWithDebDraper.com  and rewind back 1 issue here.
☆Photo COPYRIGHT Deb Draper and