Howard Jones stated, “songs can really lift your spirits & that his work hit a chord with young people who were struggling.“  I agree as this is the reason I have always been a HJ fan.  His lyrics resonated in my heart, helped me get above some really tough teenage times & still lifts my spirits to this very day. 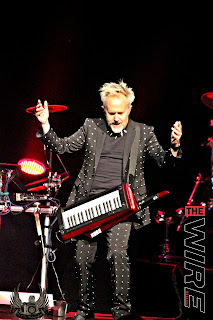 He has defined the techno/new wave realm & is still going strong. Start to finish this show was brilliant, he teleported me back in time, I got to feel 13 again. I was honored to have been selected to review & capture his essence live, thru my camera lens for the 2nd time in my career.  This time was super special!  I was 1 of only 2 outside photographers & the only Canadian media present for his ONLY Canadian stop this fall. Howard is breaking new ground to Engage a younger generation to share those iconic songs. 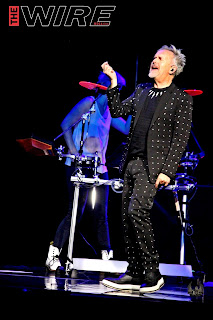 https://www.youtube.com/watch?v=cTHM1k9ACmQ
He remastered his greatest hits & blended in an even stronger techno-pop sound, while leading a retro 80’s resurgence.  Well into the 3rd millennium, Howard still exudes an infectious adrenaline & I was thrilled to be a part of the impressive audience’s responsive energy,  Never idle since 83, this global phenomenon has had his creative mind & hands drenched in one facet or musical form, whether writing, producing, recording or touring. 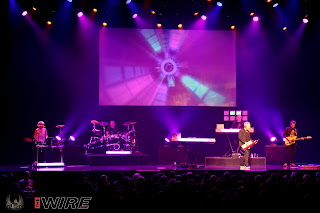 ENGAGE photo below by Engage Project which is one of Howard’s newest & most interactive live experiences.  He created it to involve the fans thru an APP on all smartphones, as a 4 part quadrilogy adventure.  Once uploaded & activated at a live HJ show, Jones would trigger a signal to your cell & activate a visual sequence that mirrored what was being performed on stage. Also, triggered a light that pulsed in time with his mesmerizing sounds.  This new way of connecting is a brilliant way to keep old & new fans intrigued; unfortunately, this replaced the ever-popular
entertaining talents of Mime, Jed Hoile. 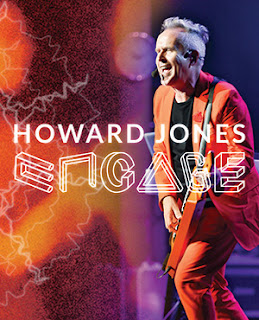 Jones thoroughly engaged his audience & it was magical to hear his fans
(80’s teens now adults) singing word for word, loud & proud, at times drowning him out, was totally PRICELESS!  His songs are filled with philosophy, inner peace, giving fans confidence & encouragement to express their feelings. This show brought a back to the future type feel with tons of fluorescents, so reminiscent of the 80’s, lighting up with every techno, addictive HJ beat we love, making this an extravagant experience.
This magnificent 62-year-old star was rejuvenating & in rare form. 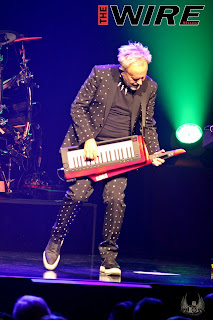 Like to Get to Know You Well (Dream into Action 1985) was the perfect ebullient creation to kick the night into high gear. He welcomed us into Conditioning (Humans Lib (1984) & lead us to the Prisoner & Everlasting Love, both from Cross That Line in 1989, which was his final album of the 80’s.
Jones introduced yet another NEW original, The Eagle Will Fly Again from the soundtrack Fly, from the movie Eddie the Eagle based on Eddie Edwards, Britain’s 1st Olympic sky jumper, also found on the current 3-CD release.
Simply awe-inspiring! This Gold & Double Platinum master of synth, has an impressive 15 top 40 hits & over 8 million albums sold from his impressive collection of 25 albums/EP’s & remastered works. 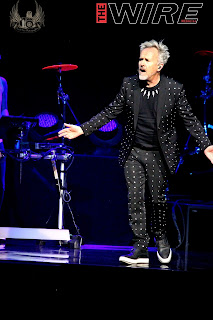 You Know I Love You (One to One 1986) was on deck next, as Howard stated,
“This song is my thank you to all of you for still coming out to my shows

Taking his originals putting another 21st century spin on them, with a very classical piano intro Human Touch, letting us know that No One Is To Blame (Dream Into Action 1985), he encouraged the audience to sing & we practically sang 3/4 of it with him, totally illuminating Jones smile. While performing that piece, he told us that he drifted back to his piano lessons in Ottawa thru Royal Conservatory of Music.  Next, 2 hits dove him back into his 1984’s Human’s Lib showing us some delightfully dynamic Equality which prepared us for  Hide & Seek.  Howard answered 1 of my interview questions nicely saying,
“I was asked recently which was my favorite song to write and why it stood out in my heart?” Further replying, “ “That was hard to pick one but, my favorite is this next song I am about to do, Hide & Seek, because I performed it acoustically July 13th in 1985 at LIVE AID & I got to meet Princess Diana, David Bowie, Thompson Twins & Duran Duran, a very moving experience,” HJ words rang close to home for me, & his words were these:“Hope you find it in everything, everything that you see, Hope you find it in everything, everything that you see, Hope you find it, hope you find it, Hope you find me in you“
Fans lept from their seats to the stage to experience his NEW Joy & to feel his enigmatic Human Touch both from his 2015 album ENGAGE, interactive is his middle name. These 2 pieces reconnected me to the past where my favorite 2 albums Humans Lib & Dream Into Action left off & he wasn’t done yet.  In between songs Howard would inject stories of his childhood or how his songs came to be. 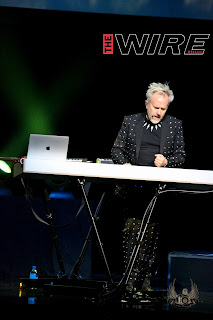 Howard asks, “how are you with doing animal voices tonight? Wolf ?  Is that ok? How’s your wolf?  The audience was weak in response.  Howard repeats, “I said, how is your wolf? ok. oh dear.  I think it needs work & I am prepared to spend the time to work with you.  Please give it a shot? Can I count on you?” 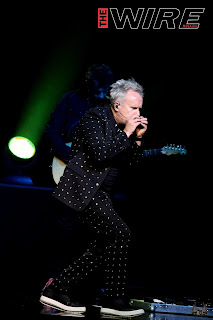 The audience yells YES, he practiced howls with us asking us to repeat after him, projecting his vocals “1, 2, 3,” he shouted, then broke right into Life in One Day (Dream into Action -1985), my theme song lately.  We interjected the wolf howls; I instantly reverted back to a crazed teen, just like that, thanks, Howard.
Once again he revisited Humans Lib album, making us question What is Love & let me tell you there was nothing like it.  The abundance of pure love in that full capacity hall was evident, once again, legions of fans & their powerful voices took over, thanks for the magic of letting us sing quite a bit of this song.  I laughed……I cried.  Howard states, “If things in your life get to you and you feel bad, you say to yourself” & the audience screamed, THINGS CAN ONLY GET BETTER (Dream into Action 1985) & that was his cue.  The stage lit ablaze with both his regular version, continuing into the revised extended new dubstep version & the crowd went berzerk during his last song of the night. We wanted more & he honorably mounted his position once again, with his trusty cherry red RK100S Korg keytar to thrill us with an Encore.   There was only 1 song that could possibly top that ending & sure enough, I was right, his 1st single off his 1984 debut album & his oldest hit- NEW SONG. 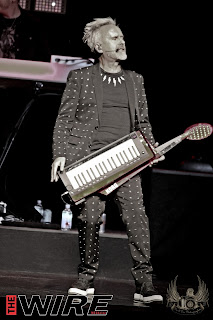 Jones explains, “this song should tell us  we can achieve our dreams, no matter what others may think.”  He continues to explain how this 1st release came to be, saying, “I was working in the factory at the time – I was doing the gigs at night & I wanted to say to people, ‘You can! It is possible to do what you really want to do if you’ve got enough guts & determination. You can do what you’re really good at in this life if you set your mind to it.  So really that’s what that song’s about. It’s about letting go of fear & seeing both sides of an argument & throwing off the things that hold you back mentally. It’s a very positive song.”   Furthering to say, “Don’t be afraid to have a go as it will take you to somewhere you have never been or it will be better than your original dream!”  He gave us a taste of things to come as he extended this hit from a regular version, what an incredible way to finish.  His remastered sounds captivate the world of popular music, stirring 19+ audiences worldwide, holding his position as one of the top synth-pop Icons in the world. This accomplished Emmy award-winning musical pioneer projected a hypnotic show.  His creative mind, pure heart & relentless optimism solidifies his
talented presence & continued longevity. 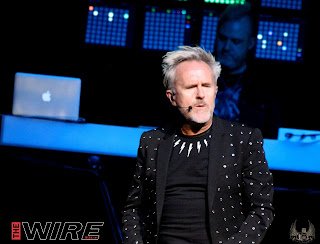 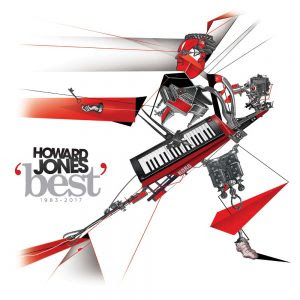 This retrospective 3-CD super deluxe edition properly spans Howard’s entire recording career, with all his major hits & key tracks across the decades from 1983 through to 2017,  including pieces from his post 80’s career. There are surprises within like the new hit
Eagle Will Fly Again.The third CD features live recordings acoustically & an exclusive mix of  You’re The Buddha by long-term collaborator/synth band mate Robbie Bronnimann, all released from the CHERRY RED label.  Sorry, to inform, but, signed copies are now out of stock.  This album cover cleverly depicts Howard’s plan & position in the future of music, he’s with us til the end of time.  Stay in tune at www.howardjones.com 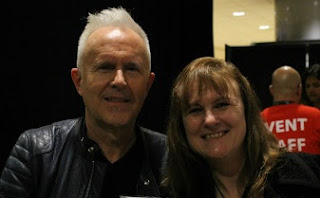