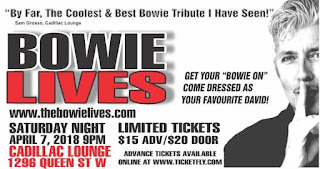 Multi Award Winning Vocalist Michael Bell and his 6 piece superstar band of masterful musicians stroll you thru 4 decades of David Bowie’s catalog so bring your dancing shoes! These super talented and award-winning artists bring the music of David Bowie back to life from the Spiders from Mars to the Scary Monster, Bell conjures the bang on vocal performances.  After David’s untimely passing in 2016, Bell was approached with offers to pay tribute to the artist that inspired him over the course of his own musical recording and stage career, and he couldn’t resist. “I was born to sing Bowie! Come see the magic unfold April 7th. Fans proclaim, “Amazing Show! a must see for Bowie fans young and old.”  “One of the most talented vocalists I’ve ever worked with,” says LA producer Greg Wells (Katy Perry, Aerosmith, Adele). “When you close your eyes and listen, you’d think you were hearing Bowie himself…” Fleming Gazette. Bowie Lives has been making their way through theatres and clubs across Ontario. Sam Grosso, veteran Toronto promoter says “By far, the coolest & best Bowie tribute I’ve seen!” Critics agree this is a show not to be missed. Michael Bell and an all-star line up of musicians take the stage to celebrate the music and influence of rock’s most progressive artist, David Bowie, and with lights and multimedia, Bowie Lives takes the audience through decades of “sounds and visions!”
www.thebowielives.com