REVIEW: 2016 TASTE OF TORONTO with Kevin Brazolot and Deb Draper

Awesome is what AWESOME IS!
Tasty Treats everywhere at this years international food sensation,  celebrating their 13th successful season, returned for it’s 3rd year at the GARRISON COMMONS AT FORT YORK, in beautiful downtown Toronto, on June 23-26, 2016.  10’s of thousands of adoring food fans attended this festival for its unique culinary adventures just for food lovers from all over the world.  Taste of Toronto has rapidly increased in size, which has joined the ranks as part of the world’s greatest food festival,  held in 22 different cities around the globe! http://tastefestivals.com
Taste of Toronto showcases and features the delectable eatables of Toronto’s legendary fine dining establishments and its leading innovative creators.  Totally dedicated to foodie fans and the promotion of Toronto’s restaurants and world renowned chefs, this incredible 4 day fabulous food and beverage experience featured outstanding local Toronto and area restaurants and their chefs, who created and served up their signature dishes. Scrumptious was the best descriptive theme, that pretty much shouted at me all day,  “Deb, eat me!”  Over indulging on fantastic gourmet food and drinks, was the goal, and having it all in one location, surely made it happen. If you are a well-dined gourmand or just passionate about fine foods and delicious beverages, then the Taste of Toronto is the prime Summer destination for you.

Each of the 21 restaurant hot spots produced their succulent masterpieces by mimicking (on a smaller scale) their restaurants, offering samples or full plate services, with well over 70 unique dishes in total to try from Toronto’s finest dining venues, click here to see all restaurants that participated http://tasteoftoronto.com/restaurants   It does get expensive, but that is – in my opinion – part of the experience and what keeps quality high. No food and wine festival is ever cheap. With well over 200 artisans in the market place to sample and purchase products, we did not have far to go as the booths were strategically placed and fully wheelchair accessible with reasonable pricing. 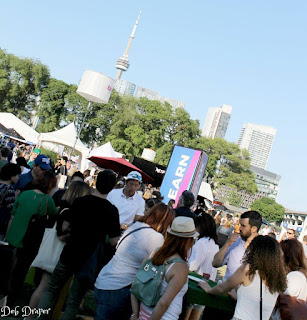 Friday –  Nota Bene & Soyrizo Vegan Tacos with sunflower sourcream, NB sriracha, corriander and sprouts (416) 977-6400  Chef David Lee is the third generation in a family line of Chefs. In August 2008, David opened Nota Bene, which became an instant success and was quickly awarded “Best New Restaurant” by both Toronto Life and enRoute Magazine. One year after opening Nota Bene, David was named the winner of the Toronto edition Gold Metal Plate in 2009. He has since become the sole owner of Nota Bene and re-launched the restaurant with a brand-new look, concept and menu in February 2016.

Friday  – Barque
Deb sampled State Fair Corn Dog with corn relish and curried mustard from the
new addition to Roncesvalles, located at the corner of Geoffery @ 299 Roncesvalles Ave, Toronto, Ontario M6R 2M3  This is a classic southern barbecue, crafted cocktails, and seasonal desserts.  The word’s out, so plan ahead make a reservation. smoke@barque.ca (416) 532-7700 http://barque.ca/smokehouse 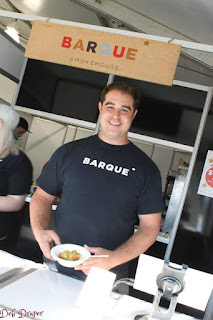 Saturday we visited Tropic Love drink stand of pure organic fresh fruit smoothies.  You simply choose from fresh pineapple, watermelon and coconut water, then they blend with ice right on the spot, with no additional sugars or additives and serve in its festive fruit complete with an umbrella topper. Tropic Love Concessions is all about letting you get some TLC. They are all about health and happiness and offer healthy products to market-goers across Canada.   this year to see for yourself click http://www.tropicloveconcessions.com
emanuel.kats@tropicloveconcessions.com 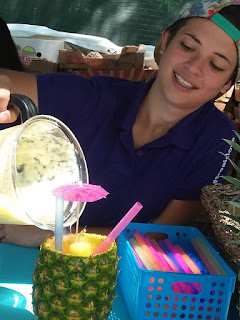 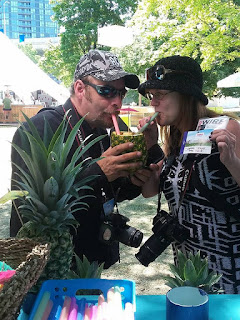 Next,  Kevin Brazolot stopped at Richmond Station where Kevin sampled the delicious
STN. BURGER featuring lettuce, beet chutney, aged cheddar, milk bun, rosemary fries, dill pickle & an onion ring. Deb and Kevin indulged in Richmond Station’s Organic Cappachino Ice Cream with a fresh waffle cone (his 1 to my 2).  You can stop in and visit their location at 1 Richmond St W in Toronto and let Chef Carl Heinrich create your one of a kind plate.  He was a winner of Top Chef Canada, Season 2.  647•748•1444 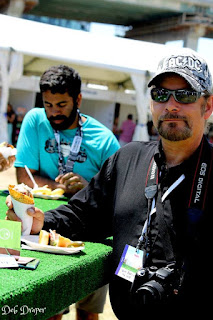 Wine Tasting connasseurs lined up early to explore Beaujolais Wine experience.  It was a full house tasting and food pairing event with Kevin on his 1st ever!  Beaujolais Wines are of French Appellation d’Origine Contrôlée (AOC) wine generally made of the Gamay grape which has a thin skin and is low in tannins. Like most AOC wines they are not labeled varietally.   Educating the crowd with knowledge of their Fruity wines to their bolder flavoured wines to the meat of the matter, their darker meater qualities.  This interactive wine sampling session was hosted by Jamie Drummond an Edinburgh-born/Toronto-based Sommelier consultant, writer, judge and educator and Director of Programs/Editor of Good Food Revolution and Presented by world class Sommelier Michelle Jobin.  Pairing up with a delicious bite sized beef slider from Barque. 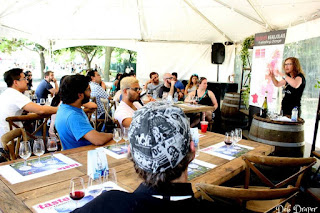 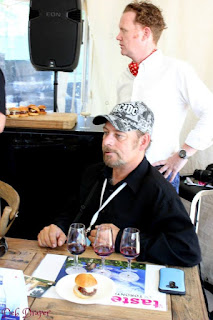 Metro Master Class unique opportunity allowed patrons who signed up at the beginning of each day, participate in a hands on cooking sessions event at Taste of Toronto.  I got the chance to capture on Friday, the one and only Chef Mark McEwan who was Canada’s youngest ever executive chef at Toronto’s from upscale Sutton Place Hotel, who leads the restaurant scene in Toronto, “North 44” to “Bymark” to the always interesting “ONE”, who is a TV Personality, Chef, Judge and Author all rolled into one and a staple name in Yorkville.  Saturday Kevin Brazolot, fabulous cook and bassist of Demolition Rage, got to experience 1st hand what it is like to cook under pressure, time limit and all.  I was viewing behind the camera, then got thrown in to assist and BURN ONIONS, which Chef Mike Ward said i did perfectly.  It was an honor to capture shots and to meet  freelance food stylist, recipe developer, tester and writer, and host Miranda Keyes along with Julia Roberts, Tom Cruise and Nicole Kidman’s attractive personal Chef Mike Ward who is also a cooking/travel/lifestyle television series director and producer and one of Canada’s top food journalists.  It was a blast seeing the room full of patrons cooking the same dish and it was amazing to see and taste the masterpiece by Kevin, as he was the only one in the room solo versus 2-3 at a station.  Sponsored by METRO. 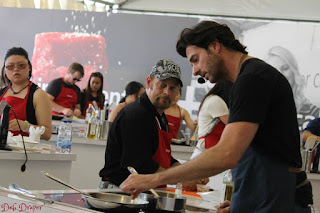 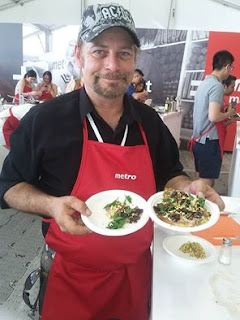 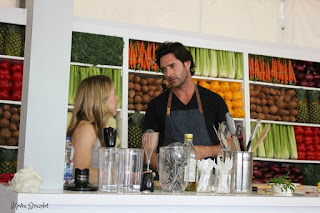 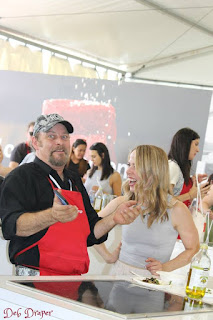 Toronto Life’s Chef Table allowed patrons to chat with Toronto’s best chefs and food experts  like Chef Franco Stalteri. Snacks supplied by La Maison Maille, Ace Barkery, Piller’s and Woolwich Dairy and beverages by ESKA Naturally Pure. We were honored to have listened in as Chef Franco Stalteri shared his one-of-a-kind restaurant Charlie’s Burgers which is a series of private dining events, he has collaborated with over 50 of the wolds best restaurants and is multi awarded Food and Wine Magazine’s top 3 in 100 best new food and drink experiences in the world. http://www.cbwineprogram.com
http://www.charliesburgers.ca 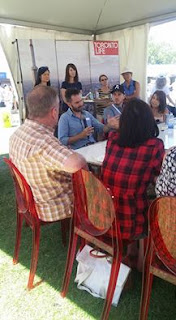 Photo by Kevin Brazolot
Deb beat the heat Friday and had the original non alcoholic beverage root beer, oh so yummy.   Kevin, on Saturday had the Newly released 5.2% Distillery Root Beer product that marks the brewery’s entry into the increasingly popular hard soda segment of the alcoholic beverage market. Distillery Root Beer is a hard  root beer made using the all-natural draught root beer currently served at Mill Street Brew Pub locations, combined with Vanilla Porter Bierschnaps distilled in the original Mill Street locations in Toronto’s Distillery District. This beverage is instantly recognizable for its classic root beer taste derived from the pure cane sugar, vanilla and all-natural root beer extract used to create this unique brew. More refined and only lightly sweet, it is very drinkable with a distinctive overtone of oak sandalwood and cinnamon spiciness mingled with flavours of licorice, vanilla and wintergreen that define traditional root beer.  Located at  55  Mill Street Toronto. call first to reserve a seat for dinner at 416-681-0338 ext 4 toretail@millstreetbrewery.com 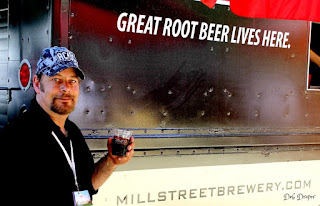 Pillers Fine Foods we sampled sausage, yummy yummy sausage.  A bit about Pillers, In 1957, Wilhelm Huber opened a small butcher shop in Waterloo, Ontario using family recipes and traditional European meat processing methods to provide his customers with authentic, great-tasting European deli meats. Two years later, his brothers Edward and Heinrich joined the company which became Piller’s Sausages and Delicatessens Limited.  From those humble beginnings, Piller’s has become one of North America’s largest producers of European sausages and deli meats, famous for award-winning products such as Black Forest ham and air-dried salamis. To this day, after five generations of sausage makers, Piller’s still uses the same natural aging, curing, and smoking process that had customers lining up outside Wilhelm Huber’s butcher shop over 50 years ago.  The company was acquired by Premium Brands Holdings Corporation in 2011 and is now known as Piller’s Fine Foods.   www.pillers.com

We captured many different things and our expectations were more than exceeded and the only negative I found was the intense heat and not a lot of places to sit in the shade.  However, it was mind-numbing the numbers of patrons that came in droves to taste the amount of food and drink options.  Selections were plentiful and Yea…we ate a lot, so many things I wanted to try, but, my wallet and stomach were not large enough! You should bring $30 or more onto your crown card to sample what this festival has to offer, plus $14 and up to VIP  $65.00 for your entrance fee,  Truly did not disappoint & I left me full of sustenance and bliss, as you know a way to a gal’s heart is via her stomach, or at least that is the way with me.  Food & drink were succulent, juicy, it wet my appetite, I highly recommend you attend & take a peek at the following video to hear what Sir cooks a lot, Kevin Brazolot had to review https://youtu.be/g0dcQzQ2fxQ 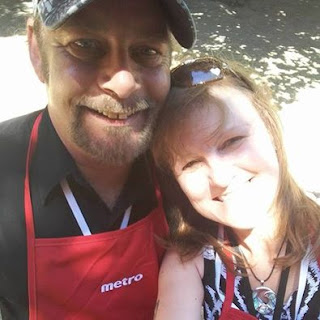