May 11, 2016 Live Music No Comments
Peterborough’s Chelsey Bennett brought her magnificent, angelic, glamorous & genuine personality front and centre May 4th, at her EP Release, held at the inspirational May Restaurant Lounge in Toronto.  She showcased her amazing all-star house band featuring highly sought after bassist Calvin Beale on his 33 “Scale FBass BNG”.  Calvin is an all rounded bassist in all genres since 14 years young from Thunder Bay.  Huge in the Toronto R&B urban pop scene.  Has toured North America, Europe and India and has appeared on TV, in films, commercials, played on BRAVO, MTV, CTV, Much Music as well.  Has performed with PRINCE, Steven Page, Alfie Zappacosta, Rick Emmett just to name a few. Then on drums, the ever popular Adam Warner. Adam has toured Europe, UK, North America, performed at New York CBGB’s to Amsterdam SXSW, Skydome, Massey Hall. He has appeared on BBC, CBC, CMT, Canada AM, Much Music, MTV, Musique Plus and composed musical backdrops for David Suzuki.  As well, performed command performance concerts for Paul Anka, Queen of Holland too.  Performed with Chantel Kreviatzuk, Randy Bachman, Sarah Slean. Recorded with Blue Rodeo and Peterborough’s ROYAL WOOD, Barenaked Ladies, Sloan, Tragically Hip, Big Sugar.  Shared stages with Iron Maiden, Peter Frampton, Rodger Hodgson and Alana Morrisette, just to name a few.  She incorporated 3 very special guests, the incredible Thomas Francis on keys, let me tell you a bit about Thomas who is a multi-instrumentalist, York University educated and studied under David Mott and Westray and comes from a long line in his Jazz, Funk, R&B talented musical family. The saulty multi-instrumentalist Carrie Chestnutt on the sexy tenor/alto sax, flute and vocals captivated and performs at sold out shows where ever she travels.  She has played on Walk of Fame, with Paul Shaffer of David Letterman Show, Mary Wilson (The Supremes).  She has performed for Rick Moranis and Tom Hanks, opened for Phyllis Dillar and worked for Shakura S’Aida, Sass Jordan and Carole Pope, just the tip of the iceberg.  Carrie is the founder of Women with Horns and is a 20 year veteran member of Woman Blues Review.  As I was leaving to catch my connective transit across GTA to home Chelsey brought up Peterborough’s Kate Suhr to sing a few too.  This show was full of pizzazz, zeal, zest and zing as Chelsey warmed the crowd with her scat.  From every effortless punch of her melodic vocals, souring me to heights making me dizzy with excitement, anxious for where her next original would take me.  Enchanting and hypnotizing, her show seduced and climaxed as she delivered to her eager full house fans.  Educated musically at Humber College, vocally trained by the crème-de-la-crème Elaine Overholt and the Nylon’s Micah Barnes, mentored by Rob Phillips and produced by Beau Dixon; wow! Chelsey is going places with a support team of potent trainers and educating peers by her side.  This show was a well-balanced jazzy, poppy, funky, R & B infused masterpiece.  Grab her EP, listen and you will find it brings you smiles and leaves you refreshed and relaxed.  I adored “Voodoo Magic” and “Sippin on Tea”, and was soothed by “Message on a Postcard” and what a perfect placement for the last song, at the end with “No End”. A strong statement speaking volumes regarding her career.  Visit: www.chelseybennett.com 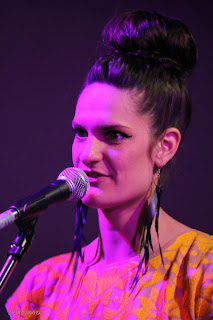 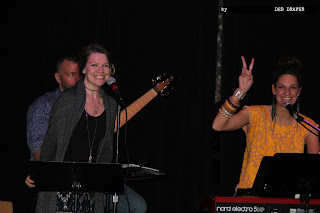