The Slambovian Circus of Dreams drops by Toronto at Hugh’s Room Live! 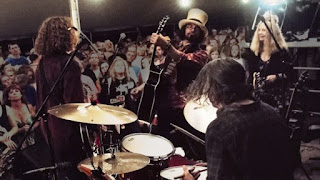 Photo by Stuart Berg
Serendipity, is an occurrence and development of events by chance in a happy or beneficial way, and that pretty much describes how I met The Slambovian Circus of Dreams in 2015, as well, how Hugh’s Room Live was revived. The club struck gold once again, with the return of  internationally acclaimed brilliance known as The Slambovian Circus of Dreams. One of the most musically explosive, magically addictive sounds revved up their mystical engines northbound for an up close, intimate & back by popular demand showcase on March 30, 2018. All the way from the Hudson Highlands of New York to Hugh’s Room Live in Toronto, where they released their enchanted blends.
Derek Andrews (HRL booking agent) kicked the night off with his usual humour and informative updates letting us know that 500 people donated $150,000.00 toward the Hugh’s Room re start up costs, and that the club had reopened as a non for profit organization, consisting of 8 board members that help steer the club.  Also, that the HRL will have new ideas and on April 28th they celebrated their 1st Anniversary of this incarnation with a show entitled ” 1 Year In,” which featured the likes of David Woodhead, Jaron Freeman-Fox, Sheila Carabine, Amanda Martinez & Donne Roberts, John Lorinc and Robert Priest, Joe Fiorito, HRL Kitchen  Band, French Squeeze, Kellylee Evans and Drew Gonsalves and 2 time Juno recipient Jack de Keyzer.

The Slambovian Circus of Dreams is a complex act of indescribable euphoria, too extraordinary for description.  Their songs stretch the limits of psychedelic to progressive rock which meets a punky sounding folk pop.   Joziah’s unique and philosophically penned pieces elaborated and made you “Look Around” (a new progressive song from their newest album, currently being produced by engineer Dio Tadin in New York).   This was their 1st time performing it live, setting the mystical tone for the evening, directing us onto a “Lost Highway” while we experienced an “Absolutely Beautiful Friggin Day.” 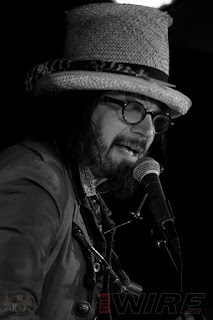 They engaged their sold out audience in magical and enthusiastic sing-alongs.  They are far from “Pushing Up Daisies” as they are to busy bringing joy to many hearts as they travel the globe.  They kept their legion of fans captivated singing along to crowd pleasing ditties like ” A Very Unusual Head,” we virtually exploded with sheer energy under their spell, making us all “Very Happy Now.” 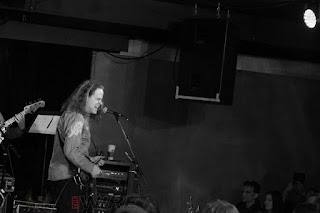 Sharkey McEwen (guitars, mandolin, backing vocals), long-time musical partner of Joziah’s, who is also the band’s main engineer and co-producer, strolled that medley piece with ease, right into the crowd pleasing and hypnotic version of The Ramones,
“I Wanna be Sedated.”  At this point the audience went nuts dancing everywhere. 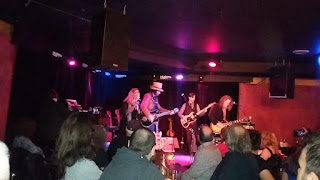 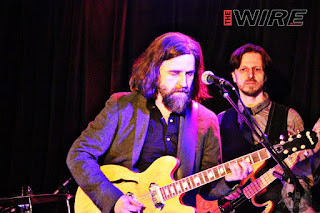 TSCoD last song of the set was “I Know Where The Bees Have Gone” which encouraged us right into another sing along responsively, “Where All the Birds and Bees Have Gone.”  After a short break, the band returned with “A Good Thief Tips HIs Hat” from their debut 1998 album, in which the title was an offhand tribute to all of the older groups and artists who have influenced them as well, they dedicated this piece to the late great David Bowie. 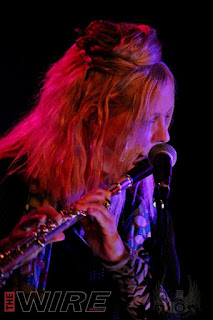 Thus leading into a “Step Outta Time,” which frontman and curator of songs Joziah, described as a cross between Pete Seeger and The Allman Brothers which featured multi instrumentalist Tink Lloyd on a Jethro Tull style flute sound.” 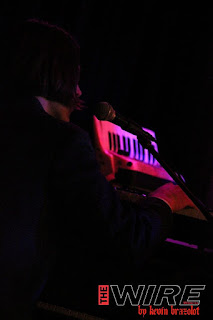 Following the hit “Solve It All Dali (daily),” was 19 year old Tristan Tadin who perfected his original vocal and piano composition “The World Spinning ‘Round.”  PRICELESS moment went to Tristan’s grandfather (a Toronto chief industrial designer) Stoyan Tadin, who got to witness Tristan live for the 1st time, he was so proud of his grandson with eyes as wide as his smile. 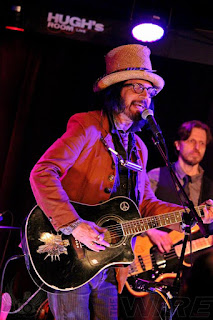 A  TSCoD playful piece followed entitled “Tink (I know It’s You)” which was created in 1998 but, only performed it at their rehearsals, once again, this was a debut of yet another amazing hit.  Joziah said, ” I wrote this song and it’s about the Tink and the Tink means something to me.  I think that in every woman there is a Tink and a Wendy.  The Wendy will get you trapped in reality, running around doing the devil’s work all the time, just to make a living and grow old and loose your spirt.  And the Tink, is the part that is kind of a pain in your ass part, the part that picks on you all the time and tries to get you to do good stuff and kicks your ass a little bit, but, it’s that pure fairy spirit.  So, Tink is that fighting spirit in women.”
“But, it’s not about me-it’s about me and all of you,“ Tink expressed. 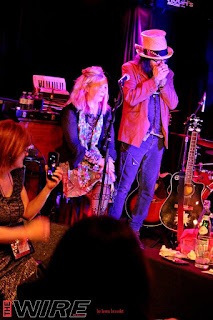 TSCoD spoke fondly regarding Canadian Country Alternative singer/songwriter Fred Eaglesmith and how at his annual Aylmer, Ontario Charity Picnic, they got to meet and become friends with Toronto born Canadian Country Music Hall of Famer and folk master Willie P Bennett. Also, this year marked the 10th anniversary of Willie’s passing in Peterborough.  TSCoD possess a barefoot confidence full of grace that has spanned 20 years since their massive sound was conceived.   https://www.fredeaglesmith.com/show/eaglesmith-charity-picnic-aylmer-ontario-2018
They incorporated their “Force of Nature,”
https://www.youtube.com/watch?v=9xAKzkQCFV4 an ode to the universe and its effects on brilliant scientists like Stephen Hawking into their excitable set. This hit will appear on their full studio album, with lots of Hawking-inspired instrumentation! 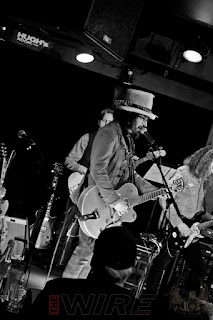 Last song of the night, was a sonic delight, a taste of Dylan “Freight Train Blues,”  amalgamating into 1 of their epic hits, the deliciously brilliant “The Trans-Slambovian Bi-polar Express,” leaving the audience absolutely mind blown.  I sensed a deep connection to a fun loving Irish Rovers song-writing style with splashes of Dinosour Jr. flooded with the hillbilly-Pink Floyd’ feel mixed with the Tom Petty kind of Americana. Relatively, you sensed you were transported back in time, straight to Woodstock!  Standing ovation filled the hall with repeated chants of ENCORE ENCORE as TSCoD proudly returned to the stage sharing more of their incredibly addictive craft. A beautiful rendition of The Beatles “Golden Slumbers” was a genius slide down deep and blended perfectly with
their hit “The invisible.” 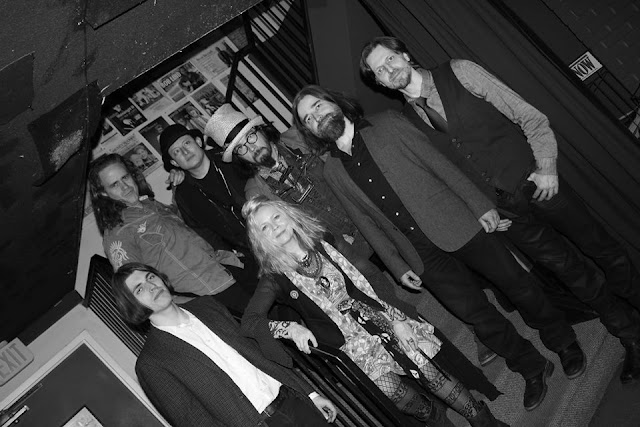 Not many original acts, can make a direct electrifying musical connection right away with their audience as strongly as they do, and I still feel that triboelectric effect when I listen to their tunes today. For those that are unaware of this feeling, well, it’s a contact electrification where certain materials, such as my mind, become electrically charged after they come into frictional contact with the specific material, like the songs by The Slambovian Circus of Dreams. They are definitely 1 of the world’s greatest acts that have stood the test of time and have managed to create and tour year after year, with an outstanding 18 released masterpieces in just under a 20 year discography-ranging from singles, videos, live concert recordings to their (1998) “Good Thief Tips His Hat,” 2004’s double disc “Flapjacks From The Sky,” to 2008’s “The Great Unravel,” as well, the 2010 “The Grand Slambovians” and their most recent 2014 Greatest Hits release
“Box of Everything.”
Stay in tune with Clear Stone and The Slambovian Circus of Dreams as they both have rare musical gems about to be released. Stop in to see what all the buzz is all about at
www.slambovia.com
and
www.facebook.com/ClearStoneMusic